This lesson on graphing conic sections rocked on multiple levels. For the students, it involved concrete mastery of standards, conceptual understanding of several topics, higher order thinking skills, student autonomy and intellectual need. For the teacher, Mr. Cornelius of Great Oak High School, it was a week’s worth of experimenting with new software and pedagogy. The genesis of the lesson was a combination of an email and a diagram. I had sent to my Math Department a link to the free online graphing calculator Desmos.com; a mutual colleague, Michael White, shared the idea of having students use their knowledge of equations to graph a smiley face. Mr. Cornelius merged these ideas into a new 5-day lesson in the computer lab. That week produced a multitude of pleasant surprises.

Michael started with a whole-class demonstration of Demos at the end of the period on a Friday. He posed the Smiley Face graph (shown above) as the minimal requirement for passing the assignment. The strength of this lesson is two-fold: 1) There are a variety of equations involved (circle, ellipse, parabola, absolute value, as well as linear), and 2) repeated restriction of the domain and range.

Michael invited students to create their own designs for a higher grade. He expected only a few takers, but in the end only a few decided to produce the Smiley Face, and this is where the richness of the lesson was truly found. During the week-long lab session, I observed one of the days and took a few pictures of some works-in-progress. 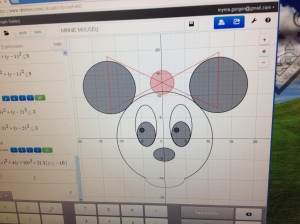 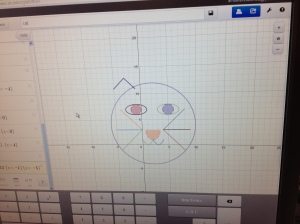 As you can see, the students independently chose to include inequalities in order to produce the shading. Here was my favorite use of shading.

What really impressed me about the lesson was the examples of students who asked to learn something new in order to produce something they chose to create. In the example below, a student wanted a curly (wavy) tail for her pig. Mr. Cornelius taught her how to graph sine and cosine waves. Granted, this was a superficial lesson, but to see someone wanting to learn a skill from next year’s course was a treat. 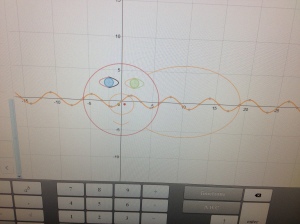 The rigor that the students imposed upon themselves, again as demanded by their creative idea, was remarkable. Look at the detail of the door handle on this house. 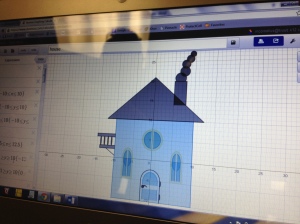 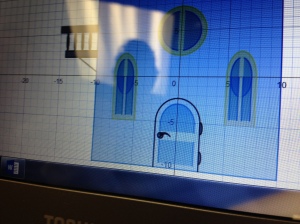 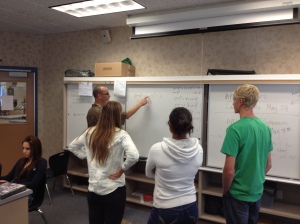 My favorite moment was this one with Michael and a handful of students. It is not as sexy as the pictures that the students were producing, but it was far more significant. Three students all had a similar question, so Mr. Cornelius conducted a mini-lesson on the board while the rest of the class worked away on their graphs. The topic on the board was not part of Michael’s lesson plan. It was sheer improvisation. For me, this interaction was the treasured gem of the lesson experience: A teachable moment generated by an intellectual need.

This was the first run of Michael’s lesson and in a conversation that we had while he was grading the assignments he conceded that he needed a scoring rubric. We also discussed how this idea could be woven throughout both Algebra 1 and 2 courses. The idea of Graphing Designs could span linear, exponential, quadratic and conic equations. I smell a lesson plan brewing!

(P.S. For those of you that get hooked on Desmos, I suggest you also check out the Daily Desmos Challenge)