Target: We will use Order of Operations and Quantitative Reasoning to write expressions for a given value.

SMP #2, Reasoning Quantitatively: I intend to use my MPJ Practice Posters to introduce each of the 8 practices within the first few weeks of school. I’m not obliged to go in numerical order; rather I choose the practice that best suits the activity for the day. So today, I gave the students a black-n-white copy of the SMP Posters. 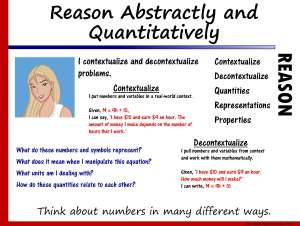 I asked each student to read through the poster quietly. The groups were to have each member share, “Something you already know about the practice, and something that you don’t know.” As a class each group shared out one of each, which I wrote on the board. 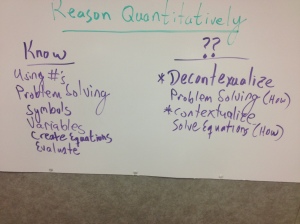 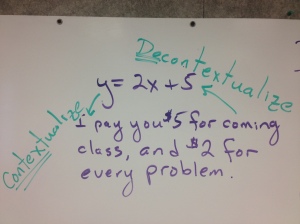 While I used the example at the right to describe the difference between contextualize and decontextualize, I let the students know that today we wouldn’t be doing that. Instead, we would being doing a lot of the things that they already know (using numbers, problem solving, evaluating). I found it very interesting that the class conceded to knowing what problem solving meant, but that they did not know how to do it.

The 4-Digit Problem: I shared the rules of the 4-Digit problem, plus the 2 examples, and asked them to create the value 19 with four 8’s. They struggled which resulted in statements like “I feel stupid,” which I was trying to illicit so I could nix that thinking quickly. I shared that they would not have gotten this far if they were stupid. “I believe that you are all smart; I am paid to make you smartER.” I continued, Since they claimed to not know what problem solving looked like, I asked for problem solving strategies.” I just got blank stares. OK, everybody give something with four 8’s, I don’t care what the value. We threw a few up on the board, and discussed some that were close. I shared the hints given in the lesson plan, and let them go at it again. When I revealed the answer, I got a lot of “That’s cool.”

So I asked them to produce values 1-5. They sputtered again, so I asked for just #1. When I showed one example, they all laughed with “It’s that easy?” They were good to go from there… 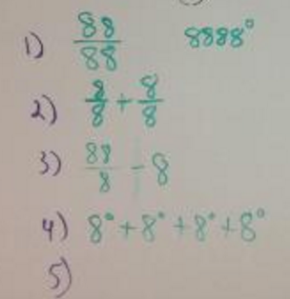 Dr. Jon Star, of Harvard University, gave a mathematically blasphemous speech at the 21st Century Mathematics Conference in Stockholm, Sweden last year. The presentation was titled, Neuroscience and Cognitive Psychology of Mathematics. His heretical statement was that mathematics does not teach higher order thinking skills; only the teaching of problem solving actually teaches problem solving. The Math Projects Journal has always preached the teaching of mathematical substance, or what is now commonly known as higher order thinking skills (HOTS), so we reached out to Dr. Star regarding his research.

The belief that just by learning math one gets critical thinking skills is also not well-supported by evidence.

MPJ
You must know that your claim stating that math does not inherently teach critical thinking is very unnerving to the math education community.

Dr. Star
Just to be clear about my goals in the Stockholm talk, I was trying to argue the following:

First, the belief that math plays some sort of special and relatively unique role (as a discipline) in promoting what you refer to as HOTS (Higher Order Thinking Skills) is not well-supported by evidence.

Second and related, the belief that just by learning/understanding math, one gets critical thinking skills as well (e.g., two for the price of one, without explicit or even implicit attention to developing HOTS), is also not well-supported by evidence. Certainly in some instances this does happen, but it does not appear to happen in any widespread way for ‘typical’ students.

And third, given that we do want students to develop HOTS, rather than expecting/hoping that these just emerge as a natural by-product of learning/understanding math, it is essential that we think about how to explicitly promote critical thinking and problem-solving in what we teach and how we teach math. With respect to this last point, arguably generations of math curriculum and pedagogy reformers have sought this same goal – teaching math such that higher order thinking skills develop. But evidence and intuition suggests that this is very hard to do. But certainly we should continue trying…

MPJ
Is it math, per se, that does not impart the HOTS, or is it the way we teach math that is inept in imparting these skills?

Dr. Star
I would say that both content and pedagogy are important, but it seems that pedagogy plays an especially important role. If we want students to be able to transfer knowledge to domains outside of math class – apply reasoning skills that worked in math class to other kinds of problems – it seems necessary to teach with such transfer goals in mind. There are many different (at times competing) pedagogical visions for how to teach math such that this kind of transfer is possible. Some feel that the best approach is to engage students in certain kinds of reasoning and communication that are believed to facilitate application of knowledge to novel situations, and others feel that a certain amount of practice in applying concepts and skills is necessary for future transfer. I can see potential merit in both of these approaches, although empirically there isn’t a lot of good evidence to point us in the right direction.

I would say that both content and pedagogy are important, but it seems that pedagogy plays an especially important role.

MPJ
The 8 Common Core Standards of Practice imply that habits of mind can be taught. In your view, do these practices have value?

Dr. Star
I think that the Common Core practice standards are admirable goals. However, as noted above, I think we are still struggling to determine the best ways to achieve these goals pedagogically.

MPJ
Anecdotally, educated people think, communicate and behave differently than uneducated people. I believe research bears this out as well. Is this then simply a non-associated correlation (people who already have educated traits get an education), or does a quality education truly transform an individual?

Dr. Star
Certainly some people do develop problem solving skills merely by learning math. Some of these people developed (or would have developed) both math understanding and HOTS even if they didn’t have a classroom or a teacher – they could have done so by themselves on a desert island, so to speak. Most people, though, definitely need math training to learn math content, and they need explicit instruction in critical thinking to develop higher order skills as well.

Most people, though, definitely need math training to learn math content, and they need explicit instruction in critical thinking to develop higher order skills as well.

MPJ
What advice do you have then for classroom teachers in the quest for teaching higher order thinking skills?

Dr. Star
Try to identify the places in your lessons where you hope students are developing higher order thinking skills, and consider ways that you can be more deliberate and explicit in your pursuit of and assessment of these goals. For example, ask your students about any broader connections they are making from the mathematical content of the lesson. Give students opportunities to apply what they have learned in a lesson to other mathematical and non-mathematical topics. Let students know what you mean by phrases such as “critical thinking”, “problem-solving”, and “logical thinking”; give students examples of what these practices look like as well as tasks that allow them to develop and experience these important competencies.

Let students know what you mean by phrases such as “critical thinking”, “problem-solving”, and “logical thinking”; give students examples of what these practices look like as well as tasks that allow them to develop and experience these important competencies.

**** Dr. Star may be reached at jon_star@harvard.edu
****For more of Jon Star’s thoughts on Math Education, see this Scholastic video on YouTube.

I created my own posters for the Common Core Standards of Mathematical Practices. I combined the best from what I found from others and added my own structure. Necessity dictated my doing this for two reasons: 1) I wanted to respect others’ copyrights, and 2) I couldn’t find any that were appealing to secondary students.

With that said, I offer MPJ’s SMP Posters for use in the classroom. (For JPEGs, click images below.) Each poster here has the following features:

The summary of the Practice straight from the Common Core documents, as listed in that famous grey box

The verbage of the Practice written in kid-friendly, first person language

A single word that embodies the particular practice

A diagram that displays an application of the practice, using Algebra as an example so as to span both middle and high school

A group of words that relate 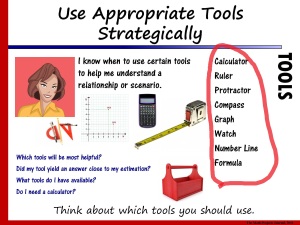 An instructive statement that includes the word “Think”

A special shout out goes to the Jordan School District’s SMP posters for elementary schools which were the initial inspiration for this set. Other sources include: Eastern Bristol High School and Carroll County.