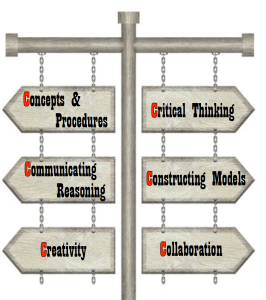 For the past three years, I have been using a claims-based grading system in my math classes. Rather than using the traditional categories of Tests, Quizzes and Homework, or the standards-based categories such as A.REI.1 or Solving Linear Equations, my grade book is now comprised of the following claims-based categories that I refer to as the 6 C’s:

I call these “claims” because the first four of the six draw directly from my state of California’s testing system, The Smart Balanced Assessment Consortium. The SBAC exams and reports are based on four Claims for Mathematics Summative Assessment: 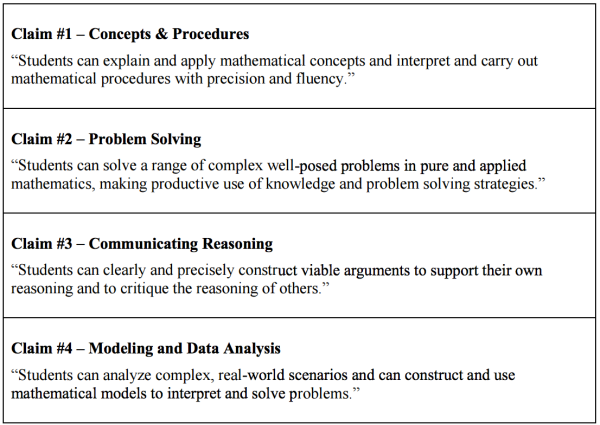 I figured that since the signers of my paycheck now expect me to impart these four abilities to students, that maybe my grade book should reflect these capacities as well.

I also know that the famous 4 C’s of 21st Century Learning are important skills for students to possess when they graduate our schools, therefore I thought that should be reflected in my grade book as well. 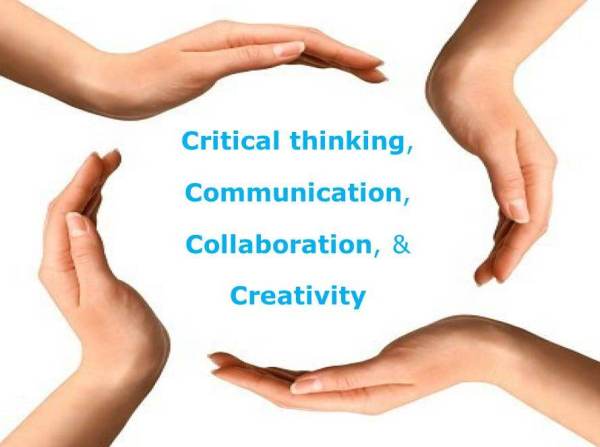 Two of these 21st Century C’s overlap with the SBAC claims. By choosing the phrasing “critical thinking” over “problem solving” and tweaking the SBAC phrase of Modeling and Data Analysis just a bit, I had my own 6 C’s of Claims-Based Grading. 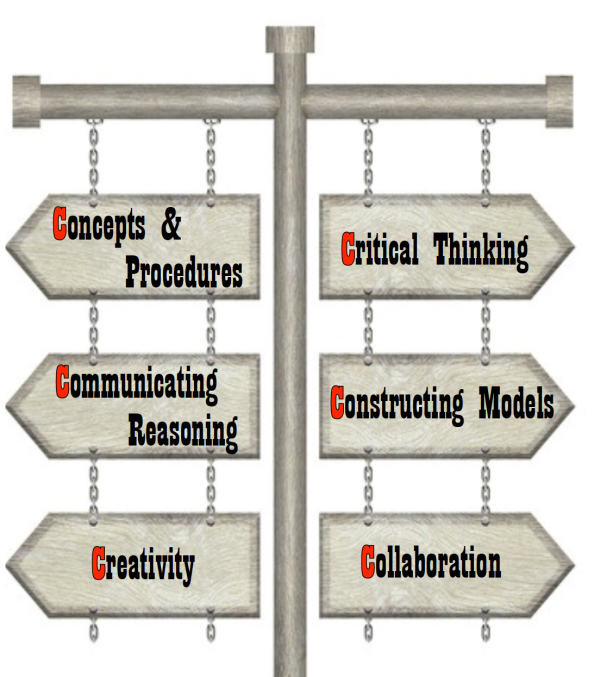 Having the picture shown above displayed as a poster at the front of the classroom serves as a constant reminder to students as to why they are in the course. There is much more to math the just busting out algorithms. If they never have to solve an equation in their adult life, hopefully, they will understand the mathematical principles that they hear about in the news, be able to think and communicate in a quantitatively manner, interpret data and represent the story that the numbers tell, solve problems creatively and work collaborative to meet a goal.  Claims-Based grading keeps these ultimate purposes front and center in the students’ minds.

My students also have a grade sheet that reflects the 6 C’s on which they record the scores they received on each assignment. Any given assignment may have more than one score on it, much like what is done with standards-based grading, with each score being based on a 5-Point Rubric (to be shared in a future post). In other words, after each assignment, students are required to look at how they performed in terms of, say, critical thinking or constructing models, rather than studying for a test.

The portfolios in the class are structured around the 6 C’s as well, with the first six of the eight sections being the 6 C’s themselves. After each assignment is recorded, it gets filed in their portfolio in one of the sections that it was graded on. For example, if an assignment was scored on Communicating Reasoning and Creativity, then the student gets to choose into which of those two sections the assignment will be placed.

The greatest benefit of the Claims-Based grading system is how much it reminds me to teach and assess the capacities that I often forget. I naturally teach to conceptual understanding, critical thinking, communicating reasoning, and collaboration, but I need to be frequently nudged to present students with tasks that require them to construct models and create unique examples or solutions. For example, a group quiz will pose several claims-based problems on the same mathematical topic with a few cumulative questions as well. 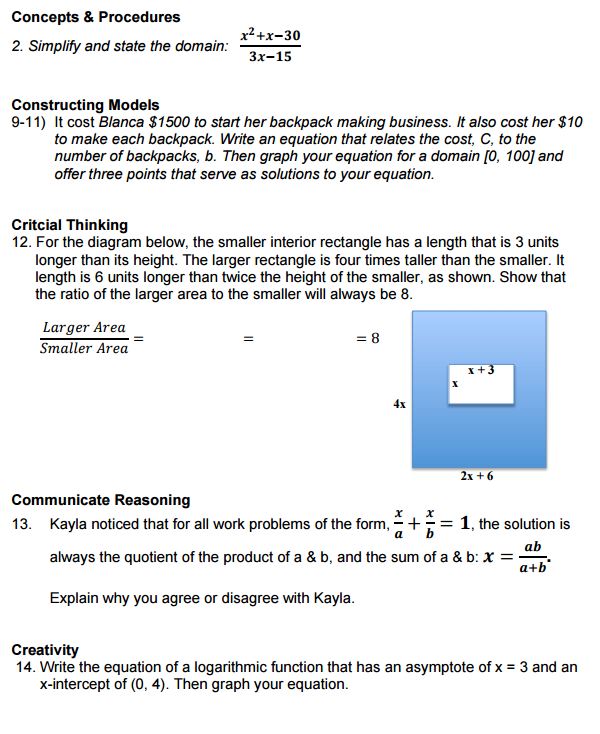 The Collaboration grade is always a self-assessed grade by the group, with me holding the power to veto. Quite often, though, they accurately score themselves. This is not surprising since we score it according to the school-wide norms on collaboration.

Reflecting upon the results of the Claims-Based grading has great value to me also. Take my end-of-semester results for one class, for example. (Note, there appears to be a large number of assignments, but remember that each assignment may have multiple scores, like the quiz example above.) 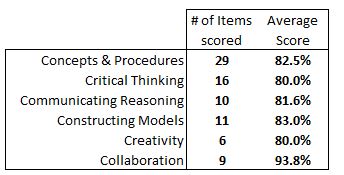 With the exception of the collaboration grade, the scores appear to be fairly consistent. This is interesting since individual students do not show this consistency. They usually have a claim or two that lags the others. The numbers that give me the most pause are the number of items. The few number of collaboration scores is not a concern, because most of the assessments are individual anyway. However, I am assessing procedures twice as much as critical thinking, three times as much as communicating reasoning and constructing models, and five times as much as creativity. I’m not convinced this is an issue, but I’m not convinced that it is not one either.

There is another interesting phenomenon that has me reflecting on my practices. The final exam scores are far less correlated under this system than with my traditional system. In previous years, I would have only a handful students whose final exam score was different from their classroom grade significantly enough to raise or lower their course grade, and most of those would be an improvement in the grade. Under my new system, there is about a 45% volatility. That means that nearly half of the students score differently enough to change their course grade, with the number being split between raising or lowering the grade. I think this is because the district finals are so heavy on the procedural side, with absolutely no questions addressing modeling or creativity. Students who are strong or weak in the Concepts & Procedures category will then see a gap between their course grade and the final exam grade. I am keeping a careful eye on this dynamic as I move forward with the new grading system.

For all the reasons that I have shared, I will be keeping this Claims-Based grading practice for a while. l see myself adjusting the system less, and using it to improve my instruction more.

3 thoughts on “The 6 C’s of Claims-Based Grading”