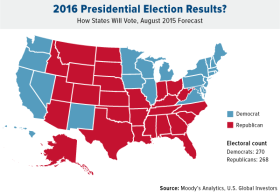 There has been a great deal of Monday morning quarterbacking about how the 2016 Presidential election polls “got it all wrong.” Radio pundits like KFI’s John and Ken have been claiming that pollsters obviously don’t know what they are doing. There are three points to consider here.

1) Did the polls get it wrong?
2) Did the pollsters do something wrong?
3) What good math activity can we generate from all this fuss?

Here are some direct answers with, hopefully, simple, clarifying mathematical (not political) explanations.

The Polls Got It Right
The poll results were within the expected margin of error. In fact, four days before the election, Harry Enten of FiveThirtyEight wrote “Clinton’s lead is small enough that it wouldn’t take more than a normal amount of polling error to wipe the lead out and leave Trump the winner of the national popular vote.” In the end, Clinton still won the popular vote, by approximately 1.5% compared to the 3.3% predicated the day before the election, well within the normal margin of error. Gallup shows that, historically, the polls have been within 2%, on average, of the actual results, and within 1% half of the time, with the victories of Reagan in 1980 and Truman in 1948 being the most notable anomalies.

In fact, Nate Silver of FiveThirtyEight noted the day after the election that a 1% swing in Clinton’s favor across all states would have flipped the Electoral College tally. 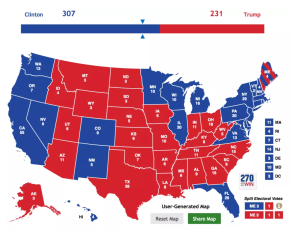 Further support that the polls got it right comes from the understanding of probability. Clinton was given a 71% chance of winning on the eve of the election. That means that Trump had a slighter better chance of winning the election than he had of flipping heads on two consecutive tosses of a coin. When heads occurs twice when tossing a coin, should we all protest that statistics and polling are unreliable? This is why Nate Silver claims that the polls missed, but he did not say that they failed.

The Pollsters Did It Right
People have been willing to give more grace to the mathematics than to the mathematicians. Pollsters (those creating the polls, not the folks on the phone) have taken a great deal of heat for poor sampling, but these pollsters have been vindicated voter turnout numbers, because the pollsters surveyed registered voters, not guaranteed voters.

PBS‘s Michael Reagan writes that the data on actual casted votes reveals that Clinton had 2 million fewer voters than Obama did in 2012, while Trump had a slight uptick over Mitt Romney. Had voter participation been similar to the 2012 election, America would have had a different 2016 result.

Liberal filmmaker Michael Moore was extremely concerned just before the election about the lack of enthusiasm for Clinton versus the overwhelming passionate support for Trump. His concern turned out to be warranted.

A Good Math Activity: Secretary Clinton Attempts A Field Goal Kick
Given the information below from FiveThirtyEight, at what distance (in yards) would a field goal kicker in 2014 have the same chance of success as Secretary Clinton in the election of 2016.

Fortunately, if an NFL kicker misses a field goal attempt from just inside the 50 yard line, I still have faith in statistics and statisticians… and America.